The ANSI/TIA-222 standard Structural Steel Standards for Steel Antenna Towers and Supporting Structures is well known among tower manufacturers and constructors. This year TIA celebrates the 55th anniversary as the nation's first standard providing guidance in the design of communications towers.

In 1959, the 12-page EIA-RS-222 standard, developed by TIA's committee on Microwave Relay Systems for Communications, provided a uniform method of specifying and calculating tower designs. These standards applied to steel transmitting antennas and to supporting towers.

As tall towers (up to 2,000') become widespread in the 1980s, a new revision of the structural standard EIA TIA-222-C was released, taking into account real-world knowledge about tall towers which supported significantly more weight. Effects of wind and icing became more apparent and were addressed in later editions of the standard.

2006 brought the most sweeping changes with the TIA-222-G revision and is the most comprehensive standard to date. Its design philosophy changed to limit state design from allowable stress design. It also considers topography that may affect structure performance with respect to wind, e.g. atop a hill or mountain. TIA-222-G also expands on the safety requirements and received recognition from the International Building Code.

With the widespread deployment of wireless mobile telephone networks within past few years, new tower structures are becoming more prevalent. 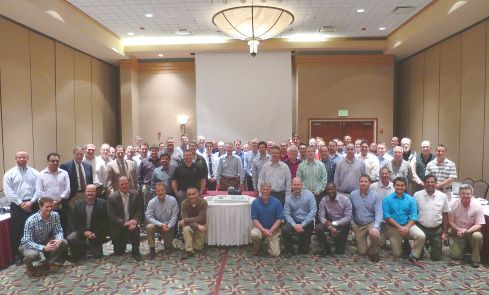 Today's TR-14 quorum meeting (pictured) brought in record attendance as we celebrated the 55th anniversary and discussed the new revision "H" to the ANSI/TIA-222 standard. TIA appreciates the support from the industry and devotion of each participant to the standard providing guidance in design of communications towers.